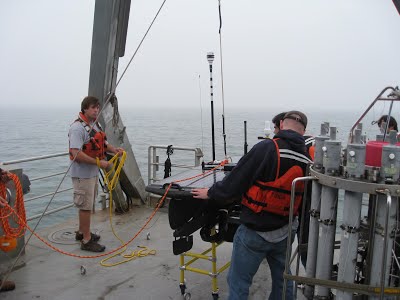 Video highlights of all below:
https://youtu.be/j_4Mtds0lzI

7:00 - Meet with Mike, Mike is making last minute changes to communications software for Iver 2, and helped out with getting the Wave Glider out of the lower floor shop.

8:00 - Assemble on the deck of RV Tioga get gear organized.  Establish WIFI router for all to work on and also for wireless COM to Iver 2.

8:45 - Help MIT Grad Student Brooks with the lashing of a USBL to a WHOI manufactured brace.  The USBL will be submerged on the starboard side of Tioga and will provide COM with Iver.  We had to drill out the aluminum and use stainless band clamps to lash the device down the brace.  We then adjusted the brace so that the USBL (Ultra Short Base Line) is submerged 2.5 feet below the surface.

9:30 - James and Brooks take Iver over to the lower pier and work on establish test code, and deploying test code to Iver.

10:05 - Iver goes for test route with James and Ian following in the Zodiac.  The mission is to have Iver surface swim, submerge, rise, then loop back to the pier.  All went well except for compass interference due to the massive hull of RV Atlantis aside the testing area.

10:45-11:30 - Mike and crew continue to work on programming.  All gear and Zodiac stowed and lashed down to the deck.

The Mission - To determine if it is feasible and advantageous to deploy a Wave Glider and AUV in tandem and have them communicate.  All communications would be relayed back to RV Tioga.  Ultimately James thinks there is a possiblity of eliminating the need for a surface vessel.  Liquid Robotics manufacturers the Wave Glider.  WHOI's Pete has deployed buoys in the past that accomplish the same goal, but this approach using a Wave Glider provides the opportunity for a mobile network of AUVs in communication with the surface.  Pete has done this in the past with the US Navy to create "safe" lanes of travel in areas suspected of mines, but with the added feature of mobility, time and effort on task can be reduced.

12:00 - Software teams ready their programs for the last time before actual deployment.  James talks with Brooks and Stefano about using handheld GPS device that can be thrown into the water to compare data to see if the actual Iver and Wave Glider data is reliable.  He would like to test the device to see how reliable its data is.

12:09 - James requests to use my Windows laptop with bluetooth and MS Excel to compile data once COM is established with Wave Glider.

12:35 - USBL is mounted to the starboard side and adjusted so that soundings are not interfered with by the hull.

12:26 - Drive foreward to starboard to get to a launch point for CTD.

12:41 - CTD is launched to test for depth, salinity and other water characteristics.  This data provides information about the effect that this body of water has on the speed of sound underwater.  This is important as sound is the medium of communication for this mission between Iver 2, Wave Glider, and Tioga.
*The CTD also has water sampling tubes mounted on the outside of it.  The unit would be dropped to depth and as it rises commands would be sent over the 10,000 LB cable (which also has 3 com lines in it) to cap off the sample tubes.  The sampler has 24 1.5 liter tubes, all of which can be operated individually.

12:49 - 1:00 - Went up to take a picture of USBL on starboard side as we began to drive off again.  The USBL had come loose from the deck screw.  A stop was made and the device was again secured with a longer bolt.

1:04 - 1:10 - A guide wire is added to the USBL that connects to the Bow so that load is taken off of the USBL assembly.  This should alleviate some stress on the bolt which is barely threaded into the deack.


1:15 - Pete analyzes sound speed data to determine the best depth to communicate at...channels are more optimal at particular depths depending on the sound speed profile.

1:28 - Communication with Wave Glider has cut out.  Pete checked and last COM indicated an alarm in the program tripped.  Group trying to get COM back with Wave Glider before Iver 2 is deployed.

1:37 - Pulled up alongside Wave Glider.  Mike, James and Peter went to work on trygint to establish COM between Tioga and Wave Glider.   The team has decided to pause on the launch of Iver 2 until Wave Glider is working properly.

2:03 - Team continues to work on COM issues with Wave Glider.  It seems that the wireless connection is cutting out.  The craft has drifted twice and Tioga has had to search for it by beacon.

2:07 - The team has connected wirelessly using RF to Wave Glider.  Tioga will now shuttle off to another location and deploy Iver 2.

2:42 - Team begins to try to open communication with Iver 2 and Wave Glider

2:48 - James informs me that the mission seems to be going well, but unsure of communication between Iver 2 and Wave Glider.  Success may have to be determined upon completion of the mission.

3:00 - COM between Wave Glider and Tioga is established.  Mike confirms that there are COM handshakes between Iver 2 and Wave Glider.  He informs me that the current configuration will only allow Iver 2 data extraction from Wave Glider once the mission is complete.  Mike states the RF capabilities could be used in the future to stream back to Tioga.  Peter requests that future modems be given unique identifiers to improve COM and COM troubleshooting.

3:15 - Plans are made to recover Iver 2 once surfaced, then recover Wave Glider and extract data.

4:02 - Team begins to extract data off of Iver 2 and Wave Glider