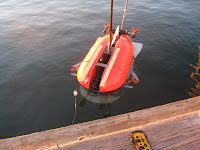 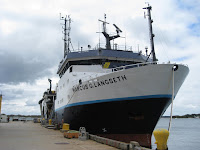 Video of all below:
https://youtu.be/QXLgprVvLsc

6:06 pm
Arrive on WHOI pier to find James, Mike, Stefano, Casey, and Mario working on the UI (Under Ice) ROV.  Within minutes the Ethernet network via fiber to he ROV is lost.  This seems to have coincided with the fiber tether becoming wrapped in UI's rear starboard thruster.  The team attempts to ping UI, but attempts are unsuccessful.  UI's cameras continue to operate normally.  It appears that the channel the the cameras are utilizing are fine.  James puts in a call to Chris to find out how to reset the network on UI to attempt to re-establish  comm.

6:34 pm
Buoys are duct taped onto the fiber tether to keep it buoyant and out of the vehicles thrusters.  UI had already been fitted with a tether "mast" previous to my arrival to help keep the tether out of the thrusters.  The mast is fixed on the stern of UI and raised at ~60 degrees.

6:37 pm
The tether is lightly tugged by Casey to change the orientation of UI.  Immediately the network communication is lost.  It appears that the fiber tether may be unreliable.

6:43 pm
After resetting the network, it is still unable to function.  Theories turn towards a damaged tether.

6:53 pm
Discussion turns towards swapping out the fiber tether, which requires  opening up the topside compensation "boot" which houses the quick disconnects for the tether.  The thought is to cheat by pouring the non-conductive oil into a bucket, install a new tether and refill with the bucket of oil.

6:57 pm
Mario and Casey discuss the advantages and disadvantages of boots vs. J boxes.  Talk of an acrylic housing to allow views of the connections is mentioned.

7:10 pm
Questions begin to ask whether the tether was "shot" or not using a diagnostic tool.  This tool would allow a technician to tune the channels that run over the fiber tether.

7:11 pm
James calls Daniel who is familiar with fiber diagnostics.  Daniel is on the way to the pier.

7:33 pm
Daniel arrives and performs diagnostics.  He pulls an attenuator off of the fiber tether equipment and  the network responds positively.

7:35 pm
Plans for  test dives off the pier are made.  The plan is to simulate under ice conditions.  Daylight is gone which will simulate low/no light levels underneath glaciers.  Plans are made to submerge underneath a floating barge and possibly WHOI RV Tioga.  All footage would be sent to NSF who is the major funding partner of the UI project.

7:40 pm
James and I work on turning the barge to 90 degrees off of the pier to allow UI to get its nose safely underneath to inspect the underside of the barge.

7:50 pm
The barge is turned to 90 degrees and anchored to the pier.

8:50 pm
RV Tioga is now the main target of UI. Various shots of Tioga's hull are taken from underneath the surface of the sea.

9:01 pm
UI is taken for a top end speed trial.  Note that the final cowlings and shields are not on the vehicle so drag is relatively higher than expected on a fully trimmed UI.  A 30 meter straight away is taken by UI to reach top speed.  UI's top speed is ~1.3 meters / second.  This equates to ~2.5 knots in nautical terms.

9:30 pm
There is discussion about the versatility of UI as it has a 600 lb payload capacity.

9:40 pm
Mike and James check the bearings of UI.  Mike sets UI up with the controller to within 1 degree of dead north.  James checks UI's readings.

Mike and James focus on getting UI to hold a fixed position.  They enter a fixed position into UI's control system.   Once UI is holding a position, Mike drives UI off the fixed mark and then the team observes to see if UI will automatically return to its desired fixed position.  This process is repeated many times.  James continues to alter the table in his software to gain the desired output that will tell UI exactly where to fix its position.

10:23 pm
UI is able to maintain a fixed position within 5cm of X and Y with regards to a GPS coordinate.  Mike suggests to submerge UI during fixed positioning testing to avoid currents on the surface.  Once submerged the team seems more satisfied with UI's performance.

10:33 pm
Data transmission speeds are adjusted by Daniel to lessen lag effects on the network.  It seems that lag could have been accountable for UI's slow response to attaining a fixed position.

11:15 pm
I jump into a Zodiac and help James tend the tether while Mike continues to man the controls and adjust UI's auto heading features.

11:50 pm
I am able to take a turn controlling UI.  Mike puts UI into a mode that limits UI's thrust which is helpful.  He instructs me to inspect Tioga's propeller.  I get within 1 meter of Tioga's prop and Mike instructs me to zoom in with UI's HD camera.  I am able to visibly inspect the threads on Tioga's prop with tremendous clarity.  During the process I was instructed use UI's forward facing sonar unit to approach Tioga.  Reading the sonar is not as easy as one would think but once adjusted I could determine UI's distance from Tioga, an onscreen scale of distance was very helpful.

11:55 pm
Casey demonstrates some amazing piloting skills.  UI is on the hook by driver control only, without any tender assistance in the Zodiac.

12:30 am
Daniel applies a voltage meter to conductive materials on the thruster.  It appears that the thrusters are generating a charge and are insulated from the frame due to the rubber grommets in the thruster mounts.  Daniel and I exchange stories about ESD issues and in this case he expresses the need to ground out the thrusters to the frame of the vehicle.  He mentions an account when he experienced a vehicle's compensation oil generating a charge and not being able to discharge properly because the hoses on the comp box were insulated.  He said that the team on that cruise had to replace the comp box tubing and hoses with conductive tubes and hoses.

12:45 am
Plans are made for testing out software later in the day at Ashumet pond using Iver AUV.   Iver is portable and could be launched from Cliff's 13' Boston Whaler.  The team breaks up for the night.

9:45am
Meet with crew of Columbia University's RV Marcus G. Langseth after they clear US Customs.  They are experiencing computer network issues and WHOI is offering equipment for use on their next voyage.  James also helps their onboard technician locate the gravity markers on the pier so they can calibrate their equipment.  This is referred to as a "Gravity Tie".

11:30 am
Pack up all of UI's gear from Pier.   Currently on pier a team is testing a kayak fitted with equipment.

12:00 pm
Load all UI gear into Deep Sea Submersible workshop.  Meet with Judy Fenwick and thank her for her help with our most recent projects.

12:44 pm
Visit a fishery tank (12' deep salt water) with James to stage Iver gear to take out to Ashumet pond.  He explains that this is a great analog way of testing software.   He can throw Iver in the back of a station wagon, take a couple of computers and network equipment and stage a test site very quickly.  I take off all of the ballast slide weights off of Iver so it can float in the pond (freshwater).

12:47 pm
James explains that they are moving towards using new software to phase out software that has been in use for decades.  He would like to run the old and new in parallel and eventually phase out the old.  For testing purposes they use real data from ROVs and AUVs, load it into the software and run simulated dives.  This is better than a truly simulated dive.  Pond testing has proven to have been a very effective means of testing small vehicles and software.  He mentions the use of Bit Bucket for version control of his team's programs.

1:40 pm
James and I pick up Cliff's Boston Whaler and tow it to Ashumet pond.

2:00 pm
The Boston Whaler is launched and driven to get it idling correctly before Iver is loaded on board and then launched. Iver is safely loaded onto the Whaler.

2:30 pm
Iver is taken to location and anchored with a 30ft line and anchor. Its position is noted as possibly being too far out for an ethernet cable to reach it.

3:05 pm
James explains the control program "ROV" is used across many vehicles.  He then runs "NavEst".  This is the new program they are fine tuning to run properly on UI.

3:16 pm
Auto positioning testing begins.  Iver is given a position to go to or to hold.  James and Stefano explain that 1 meter of error is acceptable.

3:35 pm
Testing continues as I begin to pack up my gear and head north.  I thank the team for their continued help of developing our program at NHS.  The lessons learned during this visit will benefit for years to come.